Once there was a group of Toyotamen. The first action for the introduction of a Toyota Production System was: they attracted a roll of tape and a tape measure out of their pockets and stuck colored lines on the workshop floor, to highlight the shelves. With this first step, they wanted to demonstrate that the project is about organization and order. In fact, this method is an example of “Management by View.”

These lines, lamps and graphical displays, signs with information for safety measures, Motivational sayings, signs on the containers for transport and similar institutions are conspicuous in a company with management by View, as well as the free paths and cleanliness.

It is also striking that a special order and clarity prevails. This supports the claims of the “5S” of the Toyota Production System.

With “Management by View” the organization of processes, facilities and production is described, so that unwanted incidents are visible to everyone.

The presentation of a wide variety of information in the workplace. Such information may pertain to jobs themselves, to the business as a whole, to how work teams are progressing on a project. Kanban cards are examples of Visible Management, as are storage bins with sample pans displayed, tool shadow boards, storyboards, etc.

The definition of the two components is clear, but it is questionable whether it still can be separated in practice so clear today, because the methods and also the information often serves to use both. In this paper we use the term “Management by View.”

Undoubtedly Management by View is one of the most important methods of the Toyota Production System, even if the meaning was accepted very late in the Atlantic region.

By definition of dedicated storage locations, the stock on hand can be controlled. The targeted information and the achieved order increase the motivation of employees. The order and clarity as well as the visualization of exceptions increase the quality of the products. Searches can be reduced and thus the costs in production. By taking note of the interference reduced delays in the production process and thus a faster response is achieved on the market. It is worthwhile to deal more intensively with this method.

Actually, it was developed to show irregularities. In the meantime, however, the term has expanded. Thus, the employees shall know the goals of the company at all levels, they shall receive information as feedback about the target performance of its own organizational unit and of the other structure and they shall get the feeling of being an indispensable member of an organization to be proud of. Incentives should be given to use their own skills to be even better.

In short: the people are informed about current problems and will be asked to react purposefully to the occurred condition.

This corresponds to the behavior in nature for survival. In nature, the current state is provided by signals (basically electromagnetic signals) that will be interpreted with its neuron system and then processed according to its intellectual properties. In a production the mechanical flow of the processing of materials, which is not actually natural, is represented by signals by a barely comprehensible and manageable plan, so that the sense of the people to receive and process the signals in order to change the situation according to their goals. Thereby it is taking advantage of the experience, that information is best conveyed by the eye. To quote Taiichi Ohno:

“Listen a hundred times is not as good as see it one time.”

The means for showing the state are varied. You can create coercive processes for example, a fixed allocation of places to material or external signals.

Some examples are listed below:

Simple examples next to the road markings are appointments that are made visible through markings. For example, the first part is for the week, the second part for the day of the week, e.g. blue for the current week and red for the current day. Today you can see at a glance which parts are to be processed and tomorrow morning you can easily see which operation is overdue. 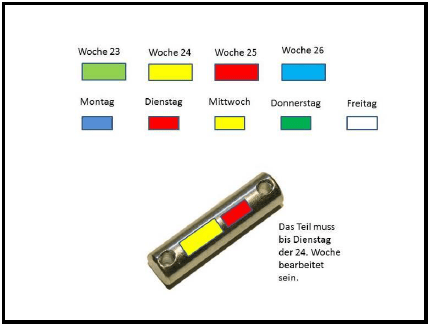 Management by View panels necessarily show information that is interesting for the employees, not only for work, but also to motivate, to provide other recognition and so forth.

For Motivation are serving advices as evidence of accepted suggestions with the names of the submitter and the compilation about the success of the improvement suggestion system.

Figure 2: Overview of a table with suggestions for improvement

The above table requires an interpretation, because most readers certainly cannot read or speak any Japanese. This table is a sample from a tire plant. Shown are details of the suggested improvements in the previous month. The first column lists the operating departments. In the second, the number of employees in the department is listed. The third column shows the number of employees who have submitted a suggestion in the previous month. It is conspicuous that in ten of the fifteen departments at least one suggestion has made each. The number of proposals submitted and the number of accepted proposals will follow in the next column. The following columns show accumulated values.

This board is not only the encouragement to participate, so that the own team is leading, but it also shows that each proposal will be considered, even if it is not realized. Therefore this should reduce the inhibitions, to submit a proposal, even if you are not sure that it will be implemented.

An interesting implementation are waiting areas for employees who are not busy. The shift manager has to ask as soon as possible, if it is only a short-term shortage of work for which there is no reasonable alternative work to go away with a shrug or to instruct another job to support a set-up process for example, or the service of a machine.

This approach is part of a method, called Shojinka or “flexible use“. It is interesting, but is facing less attention. It is the task, to use manpower in that way so that staff may be assigned to other arising tasks or exceptional needs, than they are allocated by default.

Andon (about paper lantern) is a method of Management by View. Signals are initially used as light displays. The best known are traffic lights with four colored lights that are attached to machines or a group of machines. There is an unwritten standard, namely that

Sometimes an audio complements the display, e.g. music or sirens. With turning on the light often a call for assistance is connected directed to colleagues or supervisors.

With today’s display capabilities not only lamps and lines are used for visualization, but also indicators that provide information in various kinds, often the degree of goal achievement (green: on target, yellow: warning, red: strong delayed) supplemented by graphics or numbers. These ads are called Andon boards.

The term is also used for Andon-cord. As Andon cord is originally called by the Anglo-Saxon language a lanyard, with which the employee stops the production, conveyor belt, or a plant, for example, when he encounters an error. Today, it is not necessarily a leash, but possibly also a button. Together with a lamp, the point can immediately be recognized, at which the abnormality was detected.

Although it is not necessarily eye-catching, the following two methods are a part of Management by View, namely Pokayoke and Kanban.

Pokayoke (such as “fail-safe”) is a method to prevent or reduce at least incorrect installation or operation by shaping or conspicuous markings. For example, a faulty installation is prevented by tongue and groove or similar forms. An everyday example are outlets where the plug can only be inserted in a secure manner. This method is used for a long time without reference to the Toyota Production System, but it caused the awareness for reference to the TPS at least.

Kanban is known as means of production control by card, but it is possible not only with cards, but also through other means of communication, for example possible through ball tracks. It is not necessary to use only in connection with Kanban Management by View or even as part of the Toyota Production System. Of course, it can also be used as your own method for fine-tuning. The management can use it without having to propagate it.

The markings of the parking locations and the driveways are shown as blue lines. Furthermore, in the curing presses #1 to #14 different dimensions are characterized by different colors of the parking location markings. The conveyor belts behind the press rows are only for the removal of the storage area of the heated tires, conveyor belts are used very restrictive, but are rejected for delivery installation. 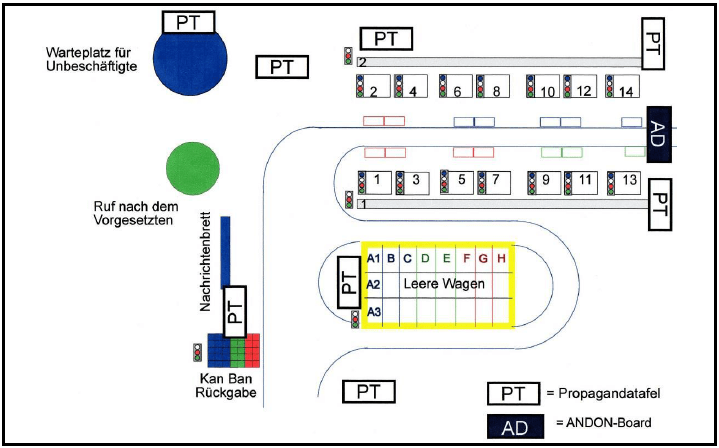 As a summary, Management by View is the implication of realization that only what can be seen as a defect, you can also leave as a defect.

To make the quote from Taiichi Ohno to be perfect:

All articles of the month you can find here.