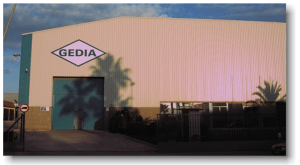 The GEDIA factory in Spain (near Barcelona) is one of five production facilities. The shop-floor area in Spain includes a lot of production machines like huge presses as well as
manual and automatic welding processes.

The team of GEDIA Spain was convinced from the beginning that a real PULL system will bring enormous benefits against the classic production planning and scheduling processes. Although the team had less experience in handling a Kanban system, the motivation of the team was huge to realize the PULL principle.

Since the very beginning of the project the team recognizes that a pure manual Kanban system would be difficult to handle because of a high number of parts and multiple production steps. So GEDIA searched on the market for a suitable e-Kanban system to support the Kanban processes in an optimal way.
GEDIA decided to use the Integrated Kanban System (IKS) of manufactus, because the system offers the best functionalities to support the production scheduling process.

“The opportunity to use the IKS system during our Kanban Pilot Project was the perfect solution for GEDIA”,

explained Mr. Wendt, Logistics Manager of the factory in Spain.

“This offered us the chance to evaluate the new PULL processes and to test the software without any risks regarding the investment.”

The Kanban project started end of the year 2009 at the plant of GEDIA Gebrüder Dingerkus GmbH to evaluate the benefits of a PULL driven scheduling process supported by the IKS system.

The objective of the project was to guarantee that a complete PULL system is the best solution for the factory in Spain but also that such processes can be used at other plants of the GEDIA group in the future and that the expected benefits and savings can be reached.

Especially the dynamic scheduling of Kanban production orders via IKS Kanban Board was required to manage the huge amount of Kanban cards at the shop-floor in a stable way.

“By using a manual Kanban scheduling process it would be necessary that we are placing huge manual Kanban boards directly at the shop-floor; but this was not possible in our production environment”,

“Additionally the risk of lost Kanban cards was not acceptable.”

Due to the fact that GEDIA has to deliver in small specific customer containers, but the production lot-sizes at the existing pressing machines are still high (although the setup times have been reduced), the number of required Kanbans is also very high for single item numbers. 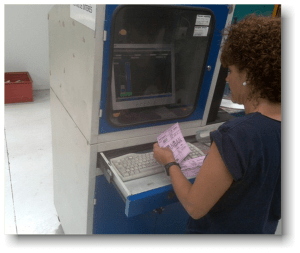 The IKS e-Kanban Board allows the visualization of all Kanban orders directly at the shop-floor in real-time. Additionally the electronic Kanban Board shows the priority of the Kanban orders for each single machine. The Kanban cards are displayed only on the screen of the board. When the production of the items is started, the new Kanban cards will be printed again by the operator.

“We have reached our objective to visualize all Kanban orders directly at the machine in real-time. The operators know always what must be produced next and take the right decisions“,

told us Mr. Marco Nebot, who was responsible for the implementation and optimization of the new processes.

“Our first goal is to reach 100% of material availablility for the welding machines downstream. The IKS Kanban Board supports our employees in their decisions”, 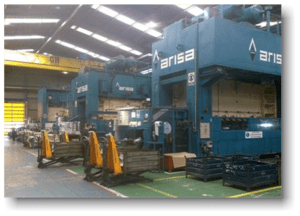 Also one external supplier has been linked to the Kanban system at the first project phase.
Raw material which will be surfaced by the supplier as well as final surfaced parts which are delivered by the supplier to GEDIA will be managed via Kanban.
The new supplier process has been integrated into the complete supply-chain process without any problems.

The following savings and improvements have been reached during the Kanban pilot project:

“The Kanban pilot project has shown that a complete PULL system is possible also for a very production intensive environment”,

“Without the support of the electronic Kanban system such a scheduling process would be very difficult to handle or nearly impossible. We are very satisfied with the easy way to handle the IKS system and with the advanced functionalities of the software. Additionally IKS helps us to establish standard process for the Kanban system”, told Mr. Wendt.

After GEDIA Spain realized the positive effects of a PULL system by using the IKS system, also other factories in the company group are interested in using such kind of efficient e-Kanban processes to improve their business.

Also the Spanish team plans the extension of the new production planning system for additional products and business areas.

clarified Mr. Wendt at the end of the project.

“We have made a lot of helpful experiences and now we are also able to help other GEDIA sites to achieve the same success”.