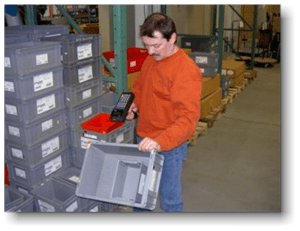 At Sunrise Medical about 90 percent of  its Just-in-Time-Produktion is controlled by Kanban. This is valid for the internal assembly and as well as for the control of external suppliers.

In 1998 the manual Kanban system was expanded with the “IKS Kanban System” of manufactus.

IKS is a software system especially meant for Kanban-Handling concept, with which the medicine technology specialist supports and rates the entire Kanban process including the suppliers.

The philosophy of “Pursuit of Excellence” (strive for perfection) describes the program of continuous improvement at Sunrise Medical, which is the basis of the enterprise culture.

Sunrise Medical has realised with it a World-Class-Manufacturing. The determining advantage of this organisation appears in the raised product quality and reliability of deliveries by simultaneous reduction of the inventory.

This was reached by the introduction of product-related autonomous assembly lines, process responsible of self checks of all employees as well as a reduction of the manufacturing depth (sub components are based on external suppliers).

Due to customer oriented Pull strategies, decisions and responsibility will be transffered on the employees . In the end, the entire production was moved by the introduction of the Kanban principle to “Pull”. Today Sunrise Medical employs an extremely flat level organizational structure. The enterprise has structured itself into several decentralised product groups.

The production is exclusively order-oriented based on the individual equipment of every single wheel of wheelchair and the big variation of other products.

The transition from Push to a Pull strategy led in the decentralised structure to the closure of the PPS system.

The planning of the production is provided and carried out  by the product group responsible employees.  The Kanban system is an important supporting factor. 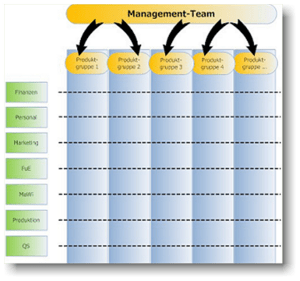 The production layout is product-oriented and corresponds to the flow production principle (Demand-Flow-Technology). This increases the clarity of the production, it eases and shortens the material and information flow. The in-plant material flow is almost completely supplied with use of Kanban,  as well  more than 80 percent of the purchase parts are procured with use of Kanban system. 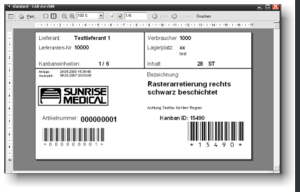 These three groups differ in terms of the organizational processes. However, it is common in all groups, that the employee who has emptied a container is responsible for the “Empty-report”. The empty container means in all cases an order and triggers the manufacturing or delivery demand of new parts (“Pull”).

The Kanban items are not longer kept  in a central warehouse, but in small decentralised deployment shelves. These supply shelves are in close distance to the customer’s place of the parts.

However, there were also deficits
Without the consequent use of the Kanban principle, the shortening of processing time of an order from 8 weeks to 3-10 days in average simultaneously with massive reduction of working capital, would not be possible. As the result of process improvements, the productiveness rose by about 300 percent, this caused reduction in Warehouse operations and improved transparency.

Why still an IT-supported Kanban system?

Despite of the success in implementation of Kanban system there was a need for Kanban transparency or Kanban-care. The care and the  operational transition from Kanban happened mainly manual. Besides to the support by the Kanban-creation and by computer documentation there were the following objectives to simplify the processes: 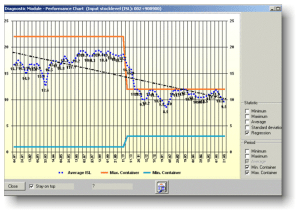 “All processes which are relevant for Kanban must be save and simple to work with”, recalls Dirk Kohl who has contributed significantly as a logistics responsible person  in the integration of IKS (Integrated Kanban system) at Sunrise Medical.

Due to his experiences about quality management and purchase he sees  the need of the IKS system for
supplier’s assessment, as well as as an early warning system for preventive measures to tackle problems related to deliveries of the external suppliers.

Base for it is the „measurement of the lead time“ of the single Kanban in the Kanban loop.

The solution
After development of own prototypes and the first experiences the search for a professional system supplier has begun. The solution for the Sunrise Medical GmbH was found, the already mentioned software product IKS of the company manufactus from Starnberg.

IKS is built up from modules and allows, apart from the support in care of a manual Kanban system, the visual control of the actual inventory situation.
The performance analyses allow a proactive action by recognition of trends. Additionally, certain characteristics can be used to assess the suppliers.

Experiences
In order to capture the container movements IKS uses a radio bar-code network. The menu-controlled bar-code scanner, in connection with IKS, protects the process of the data input, data processing and reduces manual inputs. If for example  a container must be emptied or a new Kanban card must be attached, it will be signalised in the bar-code scanner, afterwards the new Kanban cards are being printed out by the system.

Earlier lists with Kanban priorities were written by hand and were faxed to the suppliers. Today this is automatically carried out by IKS.

For the Kanban responsible employees, IKS Kanban Manager offers like a IKS diagnostics module a decentralised  interface for control of the actual Kanban situation. Management reports about deviations of lead times or material availability can be configured and printed out at a scheduled time periods.

The present results are promising:

The first successes were achieved due to introduction of the Kanban system.

The long-term reduction or optimisation of the material inventories as well as the guarantee of the deliveries reliability is possible only by the means of the Kanban-characteristics with the help of IKS.

Long-term target becomes informations and technical integration of the suppliers and the customers. The automatic fax generation of  delivery orders from the IKS system was only the first step, the Internet offers far more potential for this.

The vision is an electronic Kanban-system as a core of a supply chain management between supplier and customer.