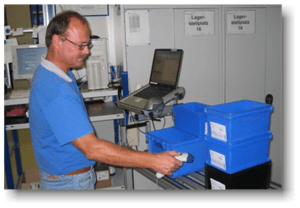 The Baumer Group is an international leading manufacturer of sensors and system solutions for the factories and process automation. The innovative family enterprise employs in 2010, 2000 employees worldwide in 35 divisions and 18 countries. The uncompromised success is founded in a high customer orientation as well as an innovative and broadly diversified product port folio of five product segments: sensor Solutions, motion control, vision technologies, process Instrumentation and gluing systems.

The Baumer Operations system is the obliging policy for all Baumer companies in order to fulfill the demanding expectations of the customers.

For the steady improvement of the internal processes the Baumer Group combines the methods of the slim enterprise management (lean management) and “six sigma”  to achieve error resistant processes.
The Goal is to reduce non value-added processes to a minimum, to exclude every kind of waste, and to reach a maximum in process security. The principle of the constant improvement forms the basis of the competitiveness of Baumer for many years.

Since 2002 the production company  Baumer Thalheim GmbH & Co. KG with headquarter in Eschwege belongs to the Baumer Group. Also in this plant the principles of the Baumer Operations system were sustainably implemented. Moreover, a Kanban system  was controlling the material flow through a Pull system.

“In general the existing Kanban system was running well, nevertheless, the optimisation potentials of a manual Kanban control were limited“, according to Volker Schmitt, senior manager Lean Projects of the Baumer Group.

Apart from Baumer Thalheim Mr. Schmitt supports also other companies of the Baumer Group at the implementation of the Lean principles after the Baumer Operations system. 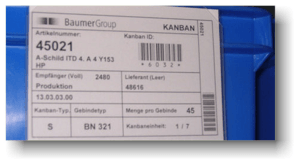 “The more components we switch to Kanban, the more difficult is the everyday management of many Kanban processes. Moreover, it was difficult to transfer Kanban signals to external suppliers or other plants”,  describes Mr. Schmitt later.

For this reason, the Baumer Group was looking for a solution on the market, which could deliver creation of simple and more transparent processes and integration of external suppliers.

Eventually e-Kanban system IKS has been chosen by Baumer Group.

In particular the electronic Kanban Board, an IKS add-on for the control of the internal production through Kanban, was an advantage for the e-Kanban solution of the manufactus Ltd, Starnberg. 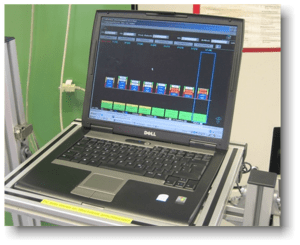 “The e-Kanban Board replaces all manual Kanban boards and helps us in the prioritisation of the Kanban orders” reports Mr. Matthias Junghans, department manager of the production.

“Due to the IKS Kanban Board the employees know always exactly what they must produce as next and the whole system is based 100% on a Pull system. Along this easy and very dynamic kind of the production control, the visual representation allows the quick adjustment of the Kanban loop without big costs.”

This is no longer valid due to use of the so-called ‘temporary Kanbans’, as soon as are scanned to the status “EMPTY” by means of bar code reader. An essential requirement of Baumer Thal also layed in organisation of the warehouse management exclusively chaotically.

“An aim in this project was also not to raise the storage surface despite of rise of the containers number. Therefore, we have decided for the chaotic warehousing” explains Mr. Schmitt.

Because this possibility did not exist in the existing IKS system yet, the chaotic warehousing was realised within the scope of a additional programming. In order to coordinate the processes, they were defined  in advance at workshop. Certain subtleties were implemented in the scope of extra programming and were tuned to the running company. 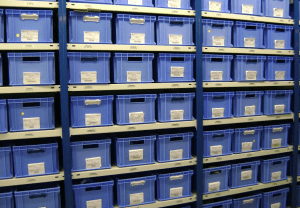 “Eventually we have the warehouse management system which is integrated perfectly into the Kanban processes and also stands in compliance with the FIFO principle ” expresses appropriately Mr. Heiner Wagenrad, department supply-chain manager.

The main advantages of the new e-Kanban processes in opinion of the Baumer Group:

“Because of the e-Kanban concept we were able to record very fast all Kanban ready components in the system. A consumption based control after Pull principle has become possible with it” is a catchy conclusion of the Baumer team.

After the successful introduction of manufactus e-Kanban System IKS in 2009 at Baumer Thalheim in Eschwege, introduction of Kanban with electronic support is planned also in other plants.